This large -scale project in Henan not only contains high "gold"

In the second half of the year, it is the traditional off -season of the construction of large projects. However, the boom of the "three batches" project construction activities in our province has always risen.

On September 28, the sixth phase of the "three batches" project construction activities were carried out throughout the province. There were 3394 projects in this period, with a total investment of 2.8 trillion yuan. In addition to the "gold" volume, the project has reached a record high. What do you bring to us?

The "training field" of ability style

The large project cannot be signed, but also to be able to "take root", and it must be able to "bloom". This not only tests the sincerity of the local government, but also the ability of local cadres.

Ma Jian, director of the Provincial Development and Reform Commission, introduced that since July, the whole province has further treated the concept of "project as king", tightly twisted the project construction and did not relax, strengthened organizational leadership, highlighting elements guarantee, pragmatic coordination services, promoting projects Speed ​​up construction. The fifth phase of the "three batches" signed 63 projects, 544 construction, and 85.4%of the operating rate; 1,361 construction projects, 1,484 in production, 79.7%of the production rate; 2504 in the production project, 2,359 effective, 2359 effective, and effective 2359. The efficiency is 94.2%.

As a superior student for the project, Anyang, Xuchang, Shangqiu, etc. have won with strength, establishing weekly conferences, monthly rankings, and seasonal observation working mechanisms to promote the formation of work joint efforts; The cadre Baolian enterprise and other work mechanisms focus on opening the project service "last mile" and adhere to the "service follow the project"; Hebi and Luohe are winning by the industrial magnetic field. Enterprises accelerate landing construction.

"Testing Stone" of the business environment

The key is the key to the project, and the key is the business environment. Among the sixth phase of the "three batches" project, BYD, Fuyao Glass, Foxconn, China Electric Power, China Resources Group, China Unicom, FAW Group, Baowu Group, Chery Automobile and other companies increased their capital and expand their capital. From the perspective of various localities, "superior students" chase each other, and the competition is very fierce. Zhengzhou, Kaifeng, and Nanyang signed a contract of over 50 billion yuan, and Puyang, Shangqiu, and Luoyang exceeded 30 billion yuan.

The business environment is good or bad, and the enterprise votes with your feet. A total of 587 projects signed this event, with a total investment of 574.65 billion yuan. Zhou Lizhen, Secretary of the Party Committee and Chairman of Hailan Group, said: "For the first time, we went out of Jiangsu Headquarters to deploy the first clothing supply chain industry base in the country in Henan. What we saw was the high efficiency of Luoyang's pragmatic services and relieved our worries."

In the province, high -efficiency service projects have become a conscious action of governments at all levels. Gao Jianjun, secretary of the Kaifeng Municipal Party Committee, said: "The two -day operation of the two -day work is used for two days.

As of now, the "three batches" contracting projects in the first five issues have a performance rate, operating rate, and funds in place of 99.1%, 97.8%, and 49.2%, respectively.

The "booster" of industrial upgrading

Today's project is the industry tomorrow. As a large agricultural province and a manufacturing province, our province is heavier in traditional industries. Under the "double carbon" goal, the demand for green low -carbon transformation and development is strong. Continue to carry out the "three batches" activities, the industrial structure adjustment of our province will also take advantage of the momentum.

During this event, Zhengzhou's project reflected the word "new", the digital economy, advanced manufacturing and strategic emerging industrial projects, with a total investment of 206.7 billion yuan, accounting for 61.9%and 65.1%, respectively. Essence The Luohe Planning Project focuses on the leading strategy and advantage of re -construction strategies. Among them, 5 tens of billions of industrial projects have started, 14 billion -level and 112 500 million projects have started 11 and 53 respectively.

Looking at the province, from the perspective of the projects in this event, there were 1629 "commissioning a batch" project, with 882 advanced manufacturing projects, accounting for 54%. Zhongmu Green Bo No. 2 Energy Station Clean and Heating Project, Henan Provincial Blockchain Industrial Park, Jinya Smart Industrial Park, Luoyang Xinrui Special Aviation Composite Materials ... With the landing of each project, the momentum of industrial transformation and upgrading will also follow it. Release and further promote the high -quality development of our province. 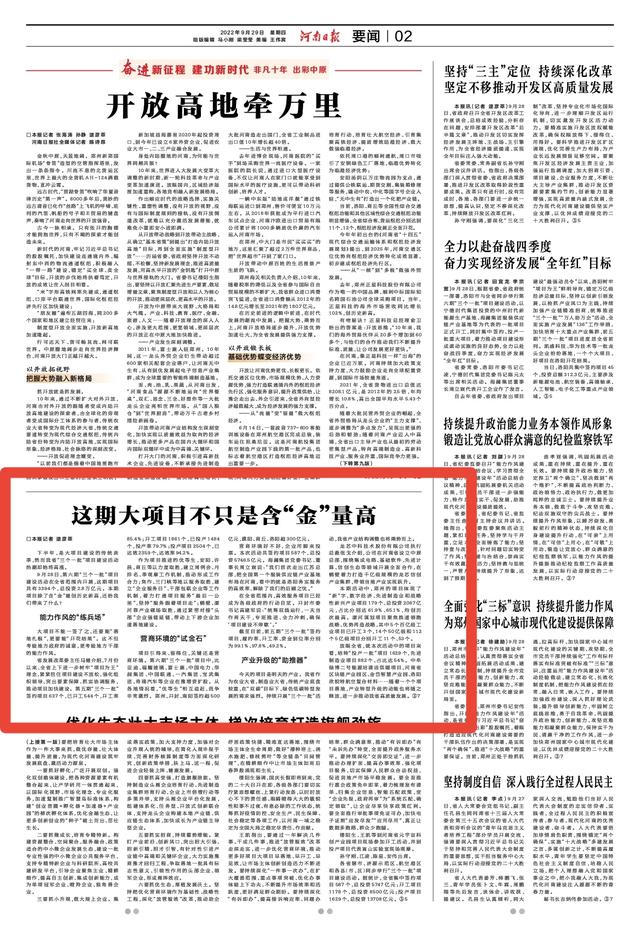 How to innovate the marketing of pharmaceutical companies?| Jianzhi Big Coffee Live

Under the trend of policy transformation, what exactly is the marketing innovation...

Since the beginning of this year, the Nanyang Branch has taken the strategy of actively serving the rural revitalization and stabilizing the economic market as the starting point. A total of 14.545 bi