Every festival, family members are reunited, and they are happy. The dishes on the dining table are salty and sweet, mixed with water and land. verb: move. Crab and prawns are tough, chewing labor, but there is no bone meat inside after peeling; pigs and chickens have no bones and can be eaten directly, but there are very hard bones to support it. Bone stubble; squid is more convenient. As long as you pick out the hard mouth as a long strip as a plastic piece, there will be no hard objects, you can gobble.

In nature, the hard structure of animals is basically only one layer. Prawn, crabs, snails, shells and other vertebrates are shells of shell, and vertebrates are "shells". Whether they are peeled first or after pickled bones, they only need to take one energy. There are very few troublesome things that are meat in the shell, the meat is shell, and the shell has the "doll structure" of the meat, but the ancient close relatives of squid -chrysanthemums are such wonderful species.

Most of the vertebrates have no hard part after peeling the shell (picture source: wikipedia)

Chrysanthemum belongs to the door of the software animal. Like the current squid, they are 10 long tentacles of software animals. Behind the tentacles are the eyes, head and long cylindrical body similar to squid. Different from squid, they do not have a few long tablets, but put large calcium hard shells on the outer side of the squid barrel, forming a structure of shell -to -meat meat, making them look like long as a whole. Nautilus with squid head. Although they look like nautilus, they have the same ancestors as squid, and they are out of Nautilus during the Cambrian and begin to evolve independently. Shells with saga.

Chrysanthemum is like an nautilus with squid heads (picture source: wikipedia)

Since the chrysanthemum and squid have the same ancestors, why is there only a few chrysanthemums in chrysanthemums? This is the choice that the two are adapted to different lifestyles. Chrysanthemum retains a relatively heavy shell. Although it is protected by the shell, it is unable to swim quickly because of its weight. Squid adapts to the fast -moving lifestyle. During the evolution, their ancestors gradually flipped the software outward, wrapped the shell into the body to form the structure of the meat shell. In this way, they greet the water flow with smooth software, reducing resistance and speeding up. After the shell becomes the inner shell, it loses the role of protecting the body. The weight will also affect the swim speed of squid, so it gradually degenerates during evolution. To this day, the original shell of the squid is only a thin and thin piece, which is only used to attach muscles, which reduces weight to the greatest extent.

In ancient times, there were very few creatures that could destroy chrysanthemum shells. Therefore, chrysanthemums were reproduced in large quantities, and their population population even exceeded fish, becoming the largest number of species in the ocean. However, after entering the Baiyeji, with the evolution of modern foods, crabs and other species, the protection of chrysanthemum "armor" gradually weakened, and their weight restricted their swimming, making them gradually at a disadvantage in the competition. Essence In order to save the ethnic group, chrysanthemums showed their magical powers: some started to be huge, and used huge body shape to make predators discouraged; some of them twisted the shells and hung on the seaweed to stay on the rabbit; there were a few chrysanthemums to learn the method of squid the same family, try try Turn the software out of the shell. Although all the best solutions, their attempts seem to be unsatisfactory ...

The fossil of the chrysanthemum, its shell is like a rotary sausage. (Picture source: reference [2])

In the Apudi layer of Russia, scientists have discovered a kind of white -cricket chrysanthemum -pleated chrysanthemum stone, which contains 3 preserved shells and about 100 shell fragments. They found that this chrysanthemum was very different from other chrysanthemums.

The shell of this chrysanthemum has a break from the middle, which may be caused by them to reduce their weight, but the internal infusion pipes have no connection in the fracture part, maintaining an open state and direct contact with the seawater. If it is an ordinary chrysanthemum, it will die because of the loss of body fluid, but there is no sign of death at all, there is only one reason -the software that cannot be preserved in the fossil is closed.

As shown in the figure below, this chrysanthemum is closed for a period of break in the shell, and the fracture is closed from the back wall of the second and third vertical shells from the newly growed. Turn thicker, extend to the middle, and surround the fracture. In the surrounded parts, scientists also found a large amount of fragments produced during the shell break, and they were also kept inside the new shell that were later growing, indicating that some tissue wrapped these fragments to make them fall off.

The first vertical shell (DW1) of the pleated chrysanthemum stone is broken, a large amount of fragments (F) appear, and the infusion pipe (SIP) is open. It was closed when the wall was thick. (Picture source: reference [1])

In addition, there are some software that supports the software outside the chrysanthemum shell. There are fine pores on their shell wall, and a part of the thin pore penetrating shell, about 1 mm in diameter, may be similar to the outside world. At the same time, their shells have long and sharp marks of large muscle attachment. The traces are far away from the shell mouth in the exit of the shell. Located outside the shell. Apudi ACONECERAS has traces of muscle attachment outside the shell, and may also have the flesh with wrapped shells. Folding chrysanthemums say that the current "shell wrapped meat" structure may be similar to this. Picture source: reference [2]

So, we can imagine what they look like now. They are like a layer of squid skin that are wrapped in an nautilus, which is the structure of the pork crust and the meat. organ. If you still can't imagine it, then think about the process of eating turtles: the outermost skirt is soft and soft, and after eating the skirt, the hard ribs evolved into the shell, unveiled the chips, the internal organs and the internal organs and the internal organs. The meat is fresh and crispy, and it is beautiful. Presumably, the chrysanthemums that have evolved to this extent are also like this.

For the shell of nautilus, you can see that there is a pearl -like flash layer in a separate place. It is the pearl layer. The white layer outside the pearl layer is the prism layer (picture source [1] [hl2]: photos.com by getty image nautilus Shell Macro Closeup Isolated by CSPHOTO)

The growth line of the pleated chrysanthemum additional shell is opposite to the direction of the ordinary shell. Image source: Draw by the author

These chrysanthemums did not degenerate shells, but there was another layer of additional shells outside the software outside the shell. Once, they were not only light, but they were heavier. What is their purpose? It is to enter a deeper body. The software covering layer of the pleated chrysanthemum and the additional shell layer is covered with the original shell, forming a armor mode of the inner layer of the outer iron armor. This is like an ancient composite armor. Strength of. Such a structure allows them to adapt to larger water pressure and prevent the shells in deep water environments from crushing.

For the recovery of pleated chrysanthemum stones, the software coat of the shell is wrapped in the inner shell (dark part), showing another shell outside the coat. Image source: Draw by the author

After forming a shell of the meat, a layer of shell is formed on the outside of the meat, which makes it a structure of a shell bag of meat. The blue part of the figure represents the shell, and the red part represents meat. (Image source: Draw by the author)

However, in this way, they have formed a strange structure of shell bags shells, and there is no similarity in modern creatures. If you want to lift a similar example, it is crab, unveil the shell on the surface of the crab, and you can eat a little crab yellow (a layer of meat for pleated chrysanthemum), but more meat is hidden under the other layer of shells under the other layer of shell If you want to eat it, you must be peeled very carefully, and you may be collapsed from the broken shell inside from time to time ... If you think about it, it is not easy to eat food. Essence

Scientists still have objections to whether they have inner shells, but some other chrysanthemums, such as chrysanthemums, may also have internal shells. In any case, this kind of creature that thought the shell was internalized for weight loss, but finally embarked on the road to gain weight, and failed to highlight the evolutionary history of the predators' bite force. Their attempts failed soon, and chrysanthemums have never developed endoic shell creatures like squid. In the end, the great extinction of the Baiji period caused the seawater to acidify, and the biological losses with the shell were heavy, and the chrysanthemum -like floating larvae were more affected. And degenerate the shell and the less acidified squid has survived so far. Chrysanthemum has the opportunity to survive with squid, but goes in the wrong direction, halfway away, and even a loss of merit, which makes people sigh. Produced: Popular Science China

"Post -90s" dialogue "post -10" Academician Zhao Zisen made a message: Be the chaser with courage to innovate 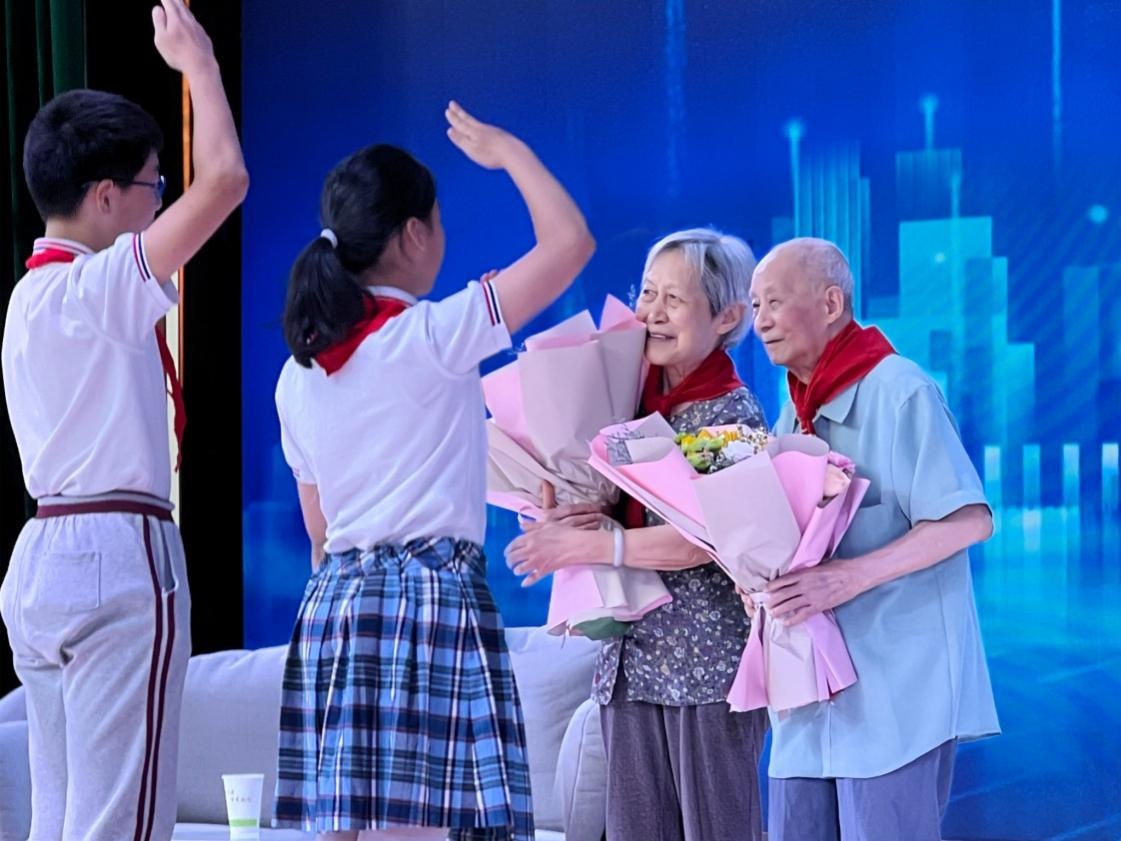 Grandpa Zhao, how many times have you studied the fiber? On June 16th, the Junior ...

With the official release of the# Huawei Mate50# series, the focus of various heat...